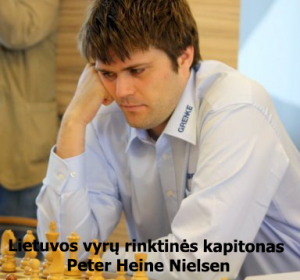 Todays match continued the pattern of beating lower-rated teams and losing to higher rated.
On board 2 Tomas missed an important tactic, whice unfortunately meant helost a deceisive pawn, and in reality the game. A pity, as the game then never really got started before it was over.
On board 1 Rozentalis had a cramped position in a french, but defended well and with a tactical sequence even took the initiative, but Predojevic defended well and the game was drawn.
Then we had hopes for Sarunas to press in a slightly better ending, but unfortunately his oppenent defended well with Kg1! where after it was just a draw.
Then Paulius needed a win to equal the match, and instead of just making a draw, he then gambled in order to save the team. This meant he got into trouble, and had to save a position a pawn down, which he did succesfully.
In many ways a pity, but also with some promising moments, and we look forward to tomorrow!